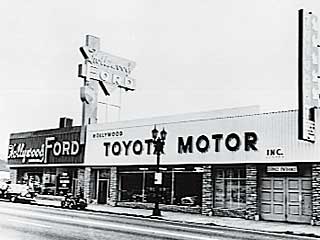 The first Toyota establishment in the USA

A Brief History of the Toyota Brand

At Cedar Rapids Toyota, we are proud to be a part of the Toyota brand, one that has been a part of the international auto game for 83 years. Starting as a developing department at a loom company named Toyoda, Toyota began making cars in 1935 after extensive research into gasoline powered motors. Shortly after the auto department established itself as an independent LTD, they altered the name and developed Toyota’s iconic logo. Their first vehicles were an AA Sedan, AB phaeton, and a GA truck.

Over the next decade, Toyota developed 10 new models and produced over 100,000 vehicles in Japan. With the introduction of 4 new styles of passenger cars, 3 new truck models, and an in between option of the small truck, Toyota was making waves in the Asian auto market. 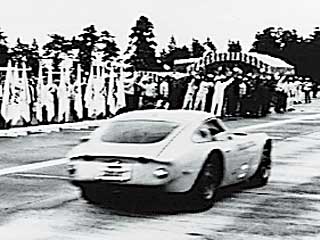 In the 1950’s Toyota introduced some of the classic models that Toyota is still known for today. In 1951 the Toyota Jeep was introduced, now known as the Toyota Land Cruiser. The third and fourth small truck models were produced, the Toyo Ace and Dyna, respectively. While this quick and expansive growth and production was happening, Toyota was developing their brand. One result of this was the slogan, “Good Thinking, Good Products.” As a result, Toyota began negotiating relations in other parts of the world to expand their business. In 1957 Toyota established their first headquarters in the United States, Toyota Motor Sales Inc., and also exported a passenger car for the first time. With the growth of business in the United States, Toyota needed new plants to enhance production. So in addition to opening two new manufacturing plants in Japan, Toyota also began production of their automobiles in Brazil. 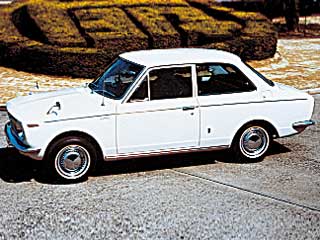 This brings us to the 1960’s when we were first introduced to the Toyota Corolla. In 1962 Toyota hit a landmark in their production having produced one million Toyota vehicles domestically. In that same year, Toyota expanded into Thailand and within the next two years, some major leaps were made in the design of new trucks. Toyota was awarded the Deming Prize for quality improvement in 1965, boosting Toyota’s ranking in the auto market. Within 5 years, Toyota cranked out some flashy sports car models, sold over a million Toyota’s in Japan, and exported over a million vehicles cumulatively. 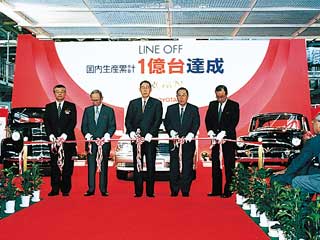 In the 1970’s, only seven years after winning their award in quality improvement, Toyota was awarded Japan’s first quality control medal. Toyota also introduced 10 new models, including the Celica, which is now the Toyota Supra. Reaching new highs in development and production, Toyota exported over 10 million units, growing from 5 million in just four years.

The Camry was introduced in 1980, Toyota united their sales and production departments to form Toyota Motor Corporation, and Toyota reached over 50 million units sold in Japan. It was a big decade for the company, but not as big as the 90’s. The RAV4 was announced in 1994, the Avalon and Cavalier in 1995, and the Prius in 1997. Toyota expanded into Europe and started specific manufacturing sites within the United States. With such a large presence in the Western Hemisphere, Toyota was even listed in the New York and London Stock Exchanges. By 1999, Toyota had produced 100 million vehicles in Japan, and their Western sales were increasing by the year. 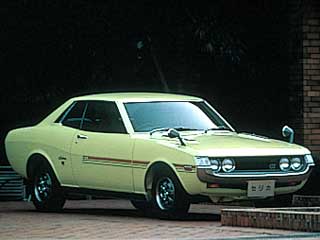 In the last 16 years, Toyota has kept growing, having introduced a record number of new models to the market, developed a hybrid system that changed the auto game, and collaborated with some of the more elite names in the auto market like BMW and Lexus.

There is so much more that could be said about the Toyota history, but as this blog is titled, we just wanted to introduce you to a brief history to enhance your knowledge about our brand. As you can see, design, development, and quality have always been at the foundation of the Toyota brand, and Cedar Rapids Toyota is no exception. We pride ourselves on giving our customers the best car buying experience possible while staying up to date on design and producing the highest quality service for our customers. Visit our new dealership at 1190 Boyson Rd, give us a call, or check out our website for more information!

Don’t forget to follow us on social media to keep up to date with Cedar Rapids Toyota and what we are doing to enhance your Toyota experience. 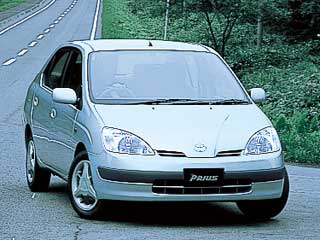